A customer the other day called me on a job they had on their vehicle to compare pricing on a dent that was pretty severe on the passenger side fender. It was a 17-inch crease that traveled through 2 body lines and was had no paint damage what so ever. It was a perfect candidate for paintless dent removal. The price for this dent with paintless dent removal was bid at $1,400 and would be guaranteed to save their factory finish and would be done the same day the job was started with no issues of color matching the paint or several days of waiting for your car to be fixed with grinders and fillers to try and get your car back to close on how it used to be. 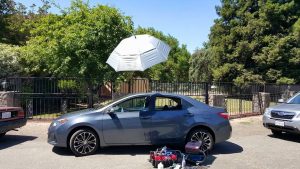 This is a situation that my company hears about all the time. Because we are able to fix the damage that people could not imagine could be repaired perfectly without having to repaint or use the conventional methods of body work.

How important is not having a carfax report done against your car for body repair from a body shop? Did you know that when your car is repaired conventionally from a body shop and it is over $500 dollars it is always reported to carfax? Did you know that if your car is repaired with paintless dent repair it almost always is never reported or is reported as having quality paintless dent repair to it with means that it was a much higher quality repair done to your car to fix it and has not diminished the value of your car like having body work conventionally on a car.

Dent Solution is a world-class, high-quality paintless dent removal business specializing in all sorts of damage to automobiles, trucks, SUV, motorcycles and high-end vehicles including Aluminum vehicles. If you have dents or are questioning whether a dent can be fixed by are experts with over 38 years combined expertise in the auto collision and paintless dent repair industry…do not hesitate to call Dent Solution to see how we can help.

Do NOT follow this link or you will be banned from the site! SCHEDULE REPAIR